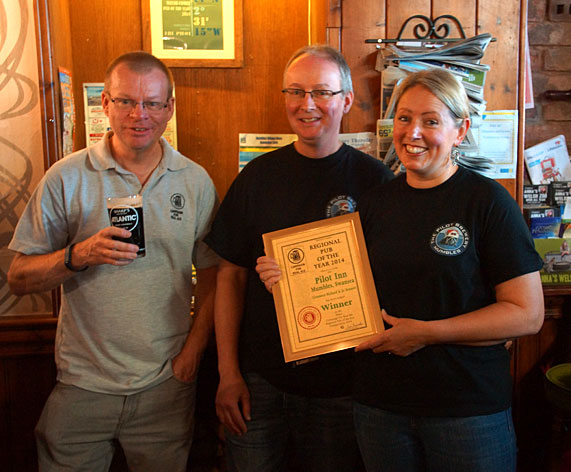 Richard and Jo after being presented with the award by Camra’s regional director Ian Saunders.

Jo and Richard Bennett of The Pilot of Mumbles were presented with Camra’s 2014 Wales Pub of the Year award today.

In a pub packed with appreciative customers, Camra’s regional director Ian Saunders congratulated the couple on their success in reopening the premises and turning it into a thriving community pub and real ale brewery.

“We judge pubs not just by the beer they serve but also by the atmosphere, the community spirit and the welcome you get when you walk in the door,” said Ian.

“The Pilot excels in all these and that’s why it’s Wales pub of the year.”

“Jo is the face of the the Pilot and for everyone who loves the Pilot it is because of Jo. This pub wouldn’t be what it is without her.”

He also went on to thank the pub’s many and loyal customers. “Empty pubs don’t win anything, so thank you all very much for keeping coming!” he said.

Richard and Jo took over the closed pub on the seafront in Mumbles, Swansea, almost two years ago and Richard began brewing within the first six months. The pub has actually spawned two breweries – the Mumbles Brewery, which Richard ran with brewing partner Rob Turner, and the Pilot Brewery, which Richard now runs by himself.

His beers Gold, Black Storm, Wrecker and Revolver have proved a big hit with drinkers at the pub and mix with ever-changing guest ales on the pub’s six hand pumps.

“Richard has done so well with the brewery, especially as he was starting from scratch,” said Jo. “The beers are just flying out of the pub.”

Chris Radford, of Swansea Camra, said: “I think Jo and Richard’s success lies in the fact that they’ve just focused on the basics and done them extraordinarily well.

“They’ve created a real haven, with the clever seating and wonderful views, a very welcoming atmosphere, and six real ales always in top nick. With no food and no stag parties, they know the kind of customers they want and they know how to look after them.”

The pub was packed for the award ceremony. 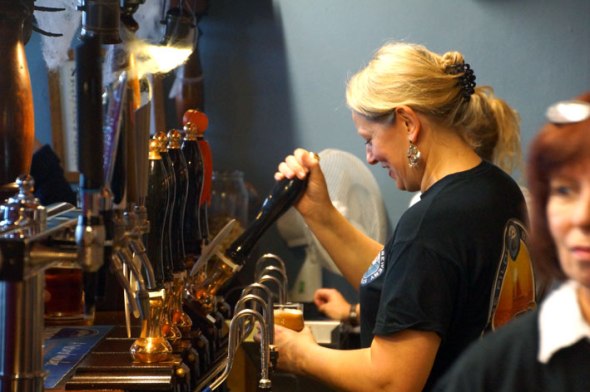 Category: Pub of the Year | Tags: Pilot of Mumbles