Welcome back to a famous old real ale pub in Gower 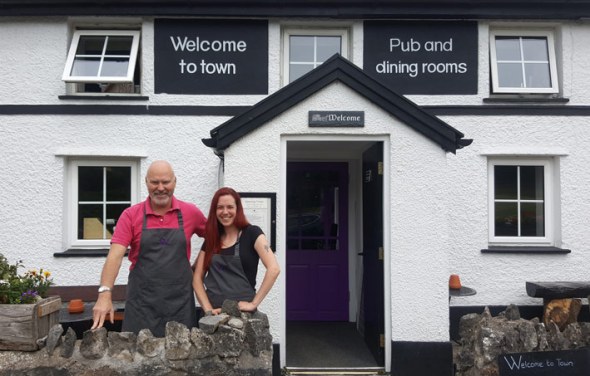 Licensee Paul Crowther with bartender Aprill Richards outside the historic Welcome to Town.

We hear all too many stories of pubs closing down so it’s good to hear about one historic old pub being saved from extinction. Especially when it serves real ale and good food and provides an excellent resting place along the Wales Coastal Path.

Paul and Natasha Crowther bought the Welcome to Town in Llanrhidian last year when it had been closed for at least two years and was on the brink of being lost forever, with planning permission in place for conversion to two houses. With a 300-year history of serving the local community, that would have been a tragedy.

“In its time, the Welcome has been used as the gaol, a food hall, a courtroom for local miscreants, a meeting place for the landowners of Gower and a masonic temple!” said Paul.

“It’s been a pub since at least 1826, but we knew it had been left empty for over two years and they had been unable to lease it out. The area had already lost the North Gower Hotel just a few years ago and we felt that it was bad for the area if more businesses were to close,” he added.

Paul had been made redundant from his job in legal services and he and Natasha were looking for something they could do locally and together. They bought the pub and carried out a complete refurbishment, ready for opening in summer last year.

The re-opening of the pub after a refurbishment.

Having been run more as a restaurant than a pub by previous recent owners, Paul says they were determined to make the place a proper pub again. And that’s good news for real ale drinkers. The pub has a long tradition of serving cask ales, which the new licensees wanted to keep.

Said Paul: “We usually have three cask ales on, sometimes four and in quiet months just two. We have one Gower ale on draught and we guest other great ales from local breweries such as Boss, Glamorgan, Bluestone & Mumbles.

“We also search further afield for the odd special: two of my favourites being from the Appleby Brewery “Mid-life crisis” and “Middle Aged Spread” both of which could be used to describe me!

“We are meticulous in caring for our ales. Line cleaning, temperature control, cask movement are all carried out with a combination of military precision and religious fervour.”

Food lovers are also catered for, with an imaginative and good value menu devised by head chef Adam Horton served in the bar, the beer garden and also in the beautiful upstairs dining room. 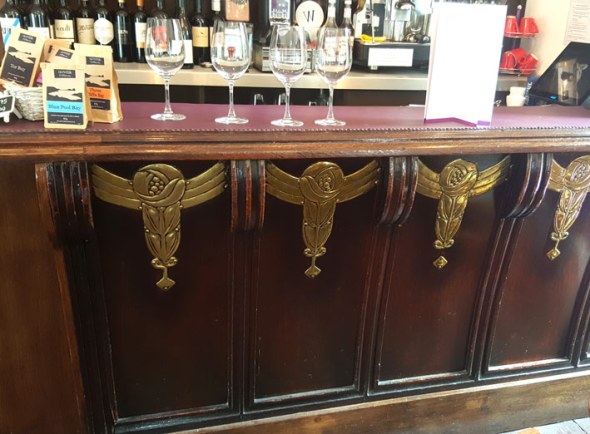 The art deco bar that was rescued from the original Kardomah Café.

The focal point of the dining room is an art deco bar that came from the original Kardomah Café in Castle Street, Swansea, where poet Dylan Thomas and the rest of the ‘Kardomah Gang’ used to meet.

“It was stripped out of the original café during the war and sent down here for safekeeping. It’s a good job they did because the café was later destroyed in a German bombing raid,” said Paul.

He and Natasha are determined that the pub lives up to its name: “Our real focus is to be THE most welcoming and friendly pub in Gower – we want everyone who comes to feel comfortable and really enjoy the whole experience.”

The pub is also just yards away from the Wales Coastal Path, so it’s a good place to seek refreshments after a good walk. Meanwhile, don’t forget to call in to the Dolphin Inn just down the hill, which always has a couple of real ales on tap and a lovely beer garden.