I had that Prince Albert of Monaco in my pub once… 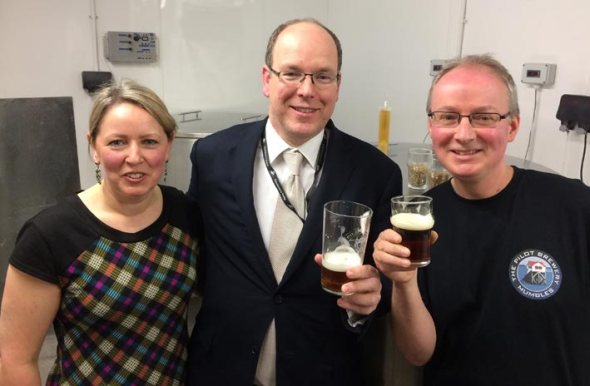 Prince Albert of Monaco with Jo and Richard Bennett at the Pilot of Mumbles.

Being Camra Wales Pub of the Year has its advantages, especially if you fancy a few celebrities propping up your bar.

Jo and Richard Bennett, licensees of the Pilot of Mumbles, don’t even bat an eyelid now when someone famous walks into the pub, so used are they to those familiar faces.

Actors, sports stars, they’ve had them all, but the day Prince Albert of Monaco popped in for a pint probably topped them all.

Apparently the Prince has friends in the area and came over for the weekend to watch the Wales Six Nations game on February 7. The following day he went to see a Swans match and then visited Mumbles Lifeboat Station.

“He came into The Pilot wearing his Swans scarf in the early evening and watched the France v Scotland game with some flabbergasted French supporters!” said Richard.

“When I introduced myself and welcomed him to the Pilot he bowed and asked permission to come in, all tongue in cheek of course. He was enjoying a pint or two of Pilot Gold and asked for a brewery tour after the game.

“During the tour he showed a lot of interest and asked many questions e.g. how many people worked in the brewery and what happens if I am sick! The Prince seemed to have a good time and showed a genuine interest in the people he met.

“That evening we also had Gareth Edwards, Jonathan Davies and Jamie Roberts in the pub!”