With eager anticipation and excitement, a party of Neath Port Talbot sub branch members on the full-to-capacity minibus, headed off to the Grey Trees Brewery, situated in Aberaman, just to the south of Aberdare. On arrival, the thirsty group was greeted by the brewer, Ray Davies, who proudly lead them to the brewery bar for the first of many free pints that were kindly on offer.

The previous evening, to celebrate the brewery’s first year of brewing, an open night had been held there, with more than 200 people sampling the great beers on offer. The highlight of the evening was marked by the arrival of rugby legend JPR Williams.

Our branch members were somewhat concerned that there may be no beer left after such a well attended evening, but Ray quickly put their minds to rest by announcing that four Grey Trees ales were there for all to enjoy. The four were (in ascending order of strength): Carradock Bitter, Market Garden, Black IPA and Double IPA – a potent 8% strong ale.

John Skinner soon sampled the perks of being Chairman of the group as he headed the disorderly queue at the bar, to receive the first pint of the afternoon.

The brewer then provided the group with an overview of the brewing process and a potted history of how the brewery came about and how he became involved in it.

We were were also invited to relax in the very pleasant seating area adjacent to the brewery shop, where bottles of Grey Trees finest ales were purchased aplenty.

After a very enjoyable afternoon at the Grey Trees brewery the, by now, slightly merry travellers bid Ray farewell after thanking him for his hospitality and boarded the minibus to set off to their next destination, Fagins Ale & Chop House in Taffs Well.

Here a splendid choice of beers was sampled, the only disappointment for the party was the announcement, at 5 o’clock, that Southhampton had beaten Swansea 1 – 0!

The by now very merry travellers left Fagins and headed for the Gwaelod-y-Garth, a short drive away, where they sampled their delicious cuisine on offer and, of course, topped up from the array of ales. 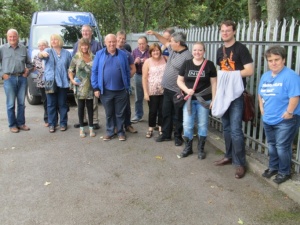 It was well into the late evening that the party boarded the minibus and set off home, the ale and fine food by now having had time to mellow the travellers, the journey home was somewhat quieter, the silence occasionally broken by 60s songs from our Liverpudlian guest, Robby – not a bad voice at all!

Everyone enjoyed and a big thanks go to Beth who organised the day, Ray the brewer at Grey Trees and also to the minibus driver for putting up with us and delivering us all home safely.