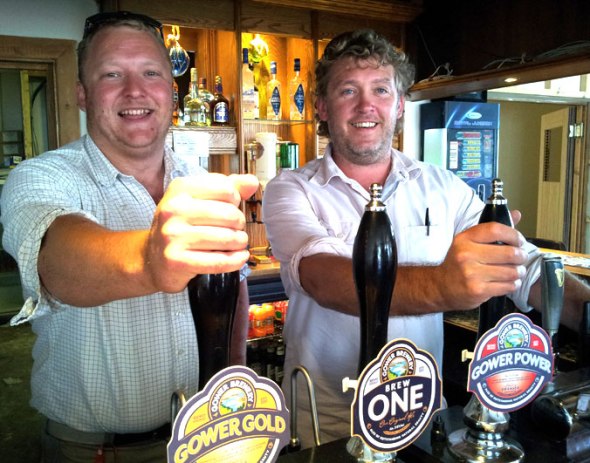 Chris Stevens (left) and Richard Knox of the Ship Inn at Port Eynon.

The historic Ship Inn in Port Eynon, Gower, has new owners and is being given a major makeover as a food-led real ale pub.

Licensees Chris Stevens and Richard Knox are planning to have ten hand pumps (five in each bar) and also an on-display cask rack that will provide further choice.

The two have a good track record in the pub industry. Chris is also licensee at the King’s Head in Llangennith and co-founder of the hugely successful Gower Brewery, while Richard comes from a family with a long history in the pub trade.

It’s good news for cask beer fans, as the pub was previously known more for its choice of lager than real ale.

The pub opened under the new management at the beginning of June and has undergone major refurbishment.

“We are hoping to get everything done by the middle of July, in time for the start of the school holidays, but we are very much open for business now,” said Richard.

“The pub will be food-led, with locally sourced produce, but we will also be providing a great choice of Gower Brewery beers and other guest ales.”

The pub, which is down a short lane on the left just before you get to the beach, has its own small car park and outside seating area.

“The pub has been what you could call a sleeping giant for many years. We are hoping to really put it on the map and provide a great service to both locals and visitors to Port Eynon,” said Richard.

The Ship Inn at Port Eynon.

3 thoughts on “Gower pub gets a real ale makeover”